You are here: Home / Difference / Affect vs. Effect

Are you one of many people who find using the words affect and effect tricky and oftentimes interchange them?

Let us help you untangle the confusion:

Affect is commonly used as a verb that denotes the act of changing or influencing something.

“How ‘Brexit’ Will Affect Travel to Europe”
The New York Times

Effect, on the other hand, is mostly used as a noun referring to something that occurs due to a cause. An effect usually results from something that has been affected.

Effect may also denote the state of being functional, operational or in execution.

Though it may be easier to remember that affect is a verb and effect is a noun, both terms have lesser known uses. Effect may sometimes be used as a verb to denote the sense, to bring about.

“Ricken Patel: middle classes have most power to effect political change”
The Guardian

Effect may also be used to refer to making a desired impression.

“Trump Campaigns for ‘Effect,’ Would Be ‘Different’ as President”
NBC News

“Bombing for show? Or for effect?”
The Washington Post

On the other hand, affect has a secondary, lesser known use as a noun referring to feeling or emotion in psychology.

“To what extent do oral contraceptives influence mood and affect?”
Journal of Affective Disorders

“The Effect of Music-Induced Mood on Aggressive Affect, Cognition, and Behavior”
Journal of Applied Social Psychology

Knowing the different forms and uses of affect and effect is a good start, but in order to master these words, you need to identify and clarify the purpose or message of the sentence first before deciding which one to use.

You can try our affect vs. effect online exercise here – What’s your score?

If anything is unclear, please have a look at our Snappy Guide to Differentiating “Affect” and “Effect”. 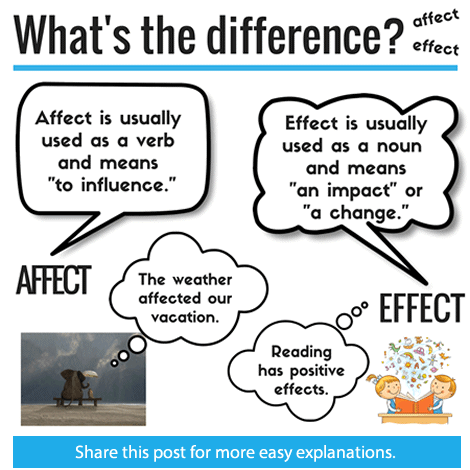 Hint → Bookmark GrammarCheck for future use.